As I'm sure many of you also experienced, my interest in the game waned quite a bit toward the end of Season 2. The state of the site, unfortunately, mirrored that. A lot of the things that I was working on got put on the back burner as I just wasn't really playing the game, making me less interested in working on the site as well.

Regardless, I'm fully hyped for Warmind and am back at it with a ton of changes (with even more on the way). Here's hoping that Bungie will release interesting content at a more steady pace over the season so that we can all stay engaged with the game until the big expansion in the fall.

In Season 3, Mercury definitely isn't going to be relevant any longer and in retrospect, may not have been entirely worth a leaderboard in the first place given the fairly small amount of content available there. At the risk of repeating the same mistake, a new leaderboard will be created for the content available on Mars in Season 3. With Hive Exclusion Protocol gear, something resembling the Calcified Fragments grind (which could potentially lead to an exotic questline), and presumably Mars Faction gear, there ought to be enough to track on Mars to justify it taking the leaderboard spot vacated by Mercury. The items that were previously visible under the Mercury tracker are now visible under the Vendors & Engrams tracker.

Next up is the Exotic Gear leaderboard. I nearly pulled the trigger on merging Exotic Armor & Weapons in Season 2, but decided against it at the time. With the addition of Exotic Masterworks and my desire to build good progress tracking for the unlocking process, it doesn't make sense now to duplicate all that across two leaderboards when they are so similar. Moreover, the total number of items being tracked by the merged leaderboard is a lot more in line with what's going on with the other leaderboards.

More info to come on this once Warmind launches and I am able to poke around in the files to see what sorts of objectives Bungie is setting in order to masterwork Exotics.

The Season 2 implementation of the Masterwork tracker was more or less a mess. The intention at the time was to encourage a grind but not insist upon it. The thought was that if you got clogged on inventory space or just didn't feel like hoarding a bunch of items you didn't really care about, you didn't feel like your score would be injured too much if you dismantled a masterwork.

However, in practice, the thresholds I set for diminishing returns were way too liberal, to the point that the values stayed high enough for long enough that it almost always made sense to keep at least one copy of any masterwork you picked up. Beyond the inventory clogging concerns, the tracker itself didn't feel particularly interesting either. It's really just a checklist of all legendary armor and weapons. I think we can do better.

Different achievements and/or groups of achievements will give points for being completed, and most importantly, those points are locked in once you earn them. This hopefully will enable everyone to grind out certain achievements but not feel compelled to keep absolutely every Masterwork you find.

Beyond that, I'm hoping to make achievements that reward normal collection (such as masterworking a full set of armor for your Titan, Hunter and Warlock) but also some more fringe stuff (such as masterworking a set of armor that grants 10+ Resilience) so that the tracker provides some challenge beyond just "collect all of these very RNG upgrades".

Beyond just enjoying the achievement grind, one of my goals this season is to make the light.gg progression system less strenuous on your vault space overall. Even though we are gaining an additional 100 vault slots, I want to build the goals in such a way that you can focus on one specific goal, work your way toward it over time, and once you've completed it, get rid of any items you don't want to keep without decimating your overall score. Achievements help accomplish this as they are permanent. Once you unlock certain achievements, not only do the points you earn for unlocking achievements permanently lock in, they also permanently grant credit for the items they cover. For example, consider the new achievement "Must Have: Walk-in Closets":

Once you complete this achievement, the tracker will always display that you own all Season 3 Exotic Armor, even if you no longer actually have those items on your characters.

A happy side effect of this piece of tech is that other annoyances such as having to maintain a copy of the "Victorious Veteran" emblem on every character to get full credit is no longer a thing. Once the system sees that you have all variants unlocked for any emblem, the credit locks in and you no longer have to keep those emblems printed out (indicated by the gold border replacing the standard green border when you own something):

Completing categories is simple enough to understand: each leaderboard has its own category, and once you complete every achievement in a category, you gain 50 points for knocking it out. 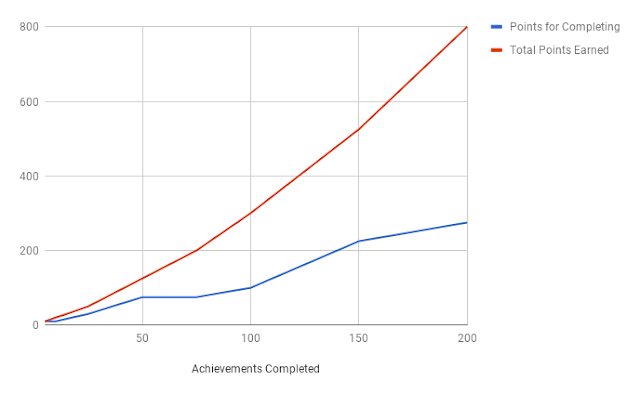 The increase in point value can been seen in that the two lines get farther apart from one another the more achievements you complete.

At launch, there's a lot of similar achievements for each of the trackers (such as owning all of that tracker's Season 3 weapons). However, over time, I hope to add more fun achievements that encourage you to do goofy stuff that you wouldn't normally do, such as:

Finally, for those of us that really like the grind, each category has a capstone achievement to serve as a big challenge for those bold enough to take it up:

Most of the updates to the rest of the leaderboards are pretty straightforward: new items come in, scoring changes to prioritize stuff from Season 3. There are a few exceptions I wanted to mention here:

That's it for the breakdown of what the light.gg leaderboards will look like in Season 3. As of now, I'm hoping to have all of this ready within a week of Warmind's launch, so keep an eye out. Tweet @lightdotgg or join the Discord server and let me know what you think!