With today's monster update that unveils the light.gg Database & Armory comes the first steps toward setting up the Season 2 leaderboards. This post is a follow-up to the previous discussion on what changes I had planned for Season 2, and it will hopefully catch you up to where my thought process is now. From there, I'm hoping to get some feedback on whether or not what I'm planning makes sense, seems fun, and so on.

Here's what I've got and what I'm thinking:

The TLDR more or less sums it up. As I've said already, with the amount of uncertainty right now it's hard for me to say "yup, this is what you're going to need to focus on" without the possibility of me reducing the value of what you've worked on by 10% to add another leaderboard. I want to have a decent concept of what's what so no one gets screwed in the long run before I say that the season has started. I'll also make an announcement at least a week before the start of the season so everyone knows when to shift the grind into overdrive. 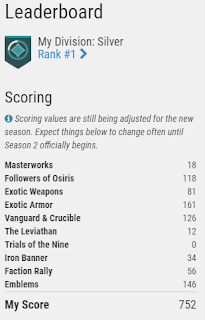 Leaderboards came together in a pretty big hurry. I think from start to finish I had them from concept to coded in less than a week. I thought it would be cool to see how my collection compared to my friends and everyone else on the site. When trying to decide how to rank people, the most obvious way was to average all of the percent completions of all of the goals and then go from most to least.

This has some pretty bad side effects, especially with the way that I created the first season's goals.

The prime example is Prestige Leviathan. That goal had only 30 components (15 Owned and 15 at Max Power). It's difficult content, but for those that were actually doing it, it wasn't particularly hard to eventually get 100% completion on that goal. Because of the overall scoring mechanism in Season 1, getting those 15 items and raising them to max power earned you 12.5% overall progress. To get that same progress against the Faction Rally goal, you had to earn 90 reputation ranks and own/max 146 items. It doesn't seem reasonable to me, despite the in-game difficulty of completing Prestige Leviathan, for those 30 components to be worth the same overall percentage as the 146+90 of the Faction Rally.

So, in Season 2, I have implemented a new scoring mechanism that weighs each component goal individually. With this new system, I am able to create much more granular goals and weigh them appropriately.

For example, the new Masterworks leaderboard scores as follows:


This new scoring system allows me to incentivize grinding Masterworks but also put in a bit of diminishing returns so that you don't feel that you 100% have to try to get a masterwork version of every single legendary weapon. With vault space being what it is, that doesn't seem reasonable for any of us.

An overall theme on the scoring is that Season 2 items are valued more highly than Season 1 items. Part of the goal here is to provide a bit of a "reset" so that we don't have people that start Season 2 with too much of an advantage because they progressed so far in Season 1. Beyond that, I think it's more interesting to try to grind for new items than just re-maxing all the items you acquired in Season 1 plus 50 new ones. I want to incentivize people to go out and do the new content (such as it is) but still give some credit for old items to reward going very hard on the grind. Hopefully that makes sense.

The Overall Leaderboard will now just rank based off of Overall Score -- the sum of all 10 leaderboard scores. Some leaderboards are worth more than others, and I think that's ok. Not all activities are created equal. However, as we move toward the official start of the Season 2, I'll be taking a close look at scoring values to make sure no one leaderboard is disproportionately valuable.

Hopefully you guys can chime in and give me some help on what goals, if any, seem to be out of place.

First and foremost, 3 new leaderboards have been added.

The Followers of Osiris tracker and leaderboard will track your progress on Mercury. Currently it tracks progress toward the Kairos armor sets (which are obtained through Mercury faction engrams) as well as the Prophecy Weapons that you forge at the Lighthouse. Without spoiling too much, it looks like there is some time-gated content on Mercury that may also end up under this tracker.

The Vanguard & Crucible tracker will track items that were previously under the "Vendors & Engrams" section for these vendors:
I'm elevating these three to a leaderboard-level goal for a few reasons. First, the Ikora set is a bit of a grind to get in the first place, and it's not as simple to complete as just spamming public events in the EDZ. As for Zavala and Shaxx, I feel like the addition of their Armor Ornaments adds enough of a grind to their respective item sets to make progress toward them worth competing over.

Finally, the Masterworks tracker and leaderboard will track progress toward Masterwork weapons, and potentially Masterwork armor if Bungie adds that before the end of the season. As mentioned above, scoring for this leaderboard hopes to reward you for grinding up to a certain point, but dwindle off as you obtain an increasingly large number of masterworks.

Beyond these three leaderboards, I will definitely be adding a tracker for The Dawning once information for what items it brings is present in the API. I'm still unsure whether or not I will create a leaderboard for it. My primary issue with the Dawning is its short duration. There's the possibility that we only get 1-2 weeks of the Dawning per year. If that's the case, I don't think that creating a leaderboard for it is really in the cards. However, as someone in the Discord suggested, I could potentially record progress against it and compile it into a full "D2Y1" leaderboard later in 2018. Also, if the Dawning adds SRL, it's possible that gets its own leaderboard since, if Destiny 1 is any indicator, SRL isn't necessarily only available during the Dawning.

When I initially created the site, the prestige raid hadn't come out yet, and judging purely by the API files, it wasn't clear if there would be power level differences, prestige exclusive items, or anything else that would differentiate prestige gear from normal mode gear. As we all now know, the prestige gear is entirely cosmetic, with very little gear unique to the mode in general. Unless we learn something about the upcoming raid lair to make it seem that there will be a significant difference in the gear obtained from its prestige mode (whether that be in the form of unique gear or just a huge number of cosmetic-only items), I think it makes the most sense to combine all Leviathan activity into one leaderboard.

While some of the stuff in that previous post is no longer true (since I hadn't come up with the new scoring system at that point), I still believe that it makes sense to combine these leaderboards to keep the overall number of component goals roughly in line across all leaderboards.

When I was working on the first version of the site, a lot of the stuff that ended up out there was just me trying to learn what's in the Bungie API, see what fun stuff I could do with it, and so on. Rank 30 requirements were an artifact of that. I knew that for the first Faction Rally once I hit Rank 30 I wouldn't be able to grind any more armor, so I wanted to know how close I was to hitting that mark. From there, it seemed like a reasonable thing to give people credit for when competing on the leaderboard -- if someone had bad luck on drops and ended up with 3/5 of a set of armor from engrams, the value they gained from reputation should help to offset that lack of progress in the Owned subgoal.

With the changes from Season 2, especially being able to directly buy pieces of armor under certain conditions, I don't believe the Rank 30 subgoal is particularly meaningful anymore. Bungie is now giving us a way to fight the bad luck from random engrams, so I don't need to build in a way to try to equalize the lucky and the unlucky. Without that component, giving credit for your reputation rank feels the same as giving credit for Devrim Kay reputation rank. Anyone can get that rank to 150 if they really want to throw the time at it, and I don't think it's appropriate for me to encourage or require that to compete.

This change is in part to offset the removal of the Rank 30 subgoals, but also because there are some pretty unique and fun requirements to some of these that show dedication to completing the activity.

As of right now, it's not possible for me to dig into the actual progress on each ornament to see if you've completed it. The only way for me to know that you've earned the ornament is for you to have a piece of armor for one of the classes with the ornament equipped (remember that unlocking for one class unlocks for all 3). I don't want to force people to keep their ornaments equipped forever for me to give them credit for unlocking them, so I'm going to have to develop a way for the site to remember which ornaments you've unlocked once it sees that you have, then give  you credit even if the ornament is no longer equipped moving forward. As of today, the ornament tracker on the Collections page is essentially just a placeholder until this "memory" system is developed. I hope to have that up and running in the next week or so.

This, again, was me trying to learn what I could do and see what was fun and what wasn't. I don't want to encourage or require people to have to spend real money through Eververse to participate in any way. As Bungie adds more ornaments, it will be more and more tempting for people that want to compete to spend cash to earn progress on this category. So, to protect people from themselves and getting sucked into the Eververse pit, I'm removing it.

The pink diamond icon will still show up on any item you've earned an ornament for (including Exotic Armor now that they have ornaments too), but collecting them will have no bearing on leaderboard stats.

That's it for the Season 2 Leaderboard changes. I feel like the goals in this season, along with the new scoring system, grant a much more fair and, hopefully, fun experience. It's a pretty big shift from how we did things in Season 1, so I'm anxious to hear everyone's feedback.